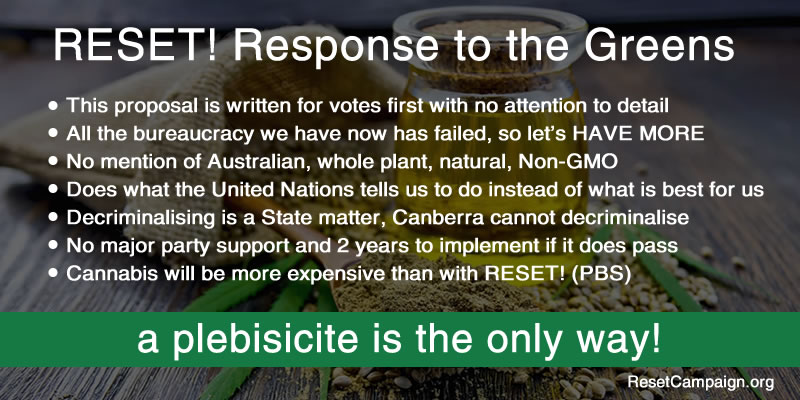 Recently the Greens have called for the deregulation of cannabis, alongside the implementation of a new agency to control the sale and distribution of medical cannabis to those unable to grow their own.

We have listened to the debate over the last week and seen the new poll that strongly supports legal cannabis. While some great people have asked for something like this, the truth is this proposal will not actually change anything. This is why.

The only conclusion from drug decriminalisation in countries like Portugal is that is has been a spectacular success.  They have seen reductions in: drug use, addiction rates, crime rates, health care costs and policing costs. So the Greens are on solid ground here except for one simple problem - ZERO support from any of the major parties. ZERO support from PHON, NXT, Lambie and Katter. The Greens may well be justified in taking the moral high ground here - and decriminalising cannabis IS the moral high ground - but in the absence of any support it feels as though it is a cynical proposal to recapture votes in the lead up to an early election rather than a proposal to actually achieve anything.

The proposal will not do anything and the Greens know this. Drug penalties are a State matter, and the Greens are introducing this bill Federally. Unless States sign on then NOTHING WILL CHANGE.

The Greens are bowing to the United Nations' authority

For those that do not recognise the structure the Greens have used - the United Nations Single Convention on Narcotic Drugs requires that the Government must be the one to grow, process and sell cannabis. RESET! tells the UN to piss off and gives that right under license to Australians. The Greens' proposal acknowledges that the United Nations can tell us what to do, and they have created a very awkward and counter-intuitive proposal to stay within United Nations mandates.

Can you find the word "Australian" in their proposal? Or the words "whole plant" "non-GMO" "natural"? I can't. I appreciate they do want to allow people to grow their own but grow what exactly - whatever the UN lets them grow? The money and the power it creates will not be in self growing, it will be in the Medical Cannabis supply chain. There is no mention in their proposal that this product should be Australian, natural, non-GMO or even whole plant. These are all key elements of RESET! Could this be because the Greens' imagine a world without borders or countries, where encouraging an Australian industry is nationalist and therefore racist? Why is there no mention of stopping GMO cannabis? Could that be because the UN has given cannabis rights to companies like GW Pharmaceuticals that own genetically modified strains? By Genetically Modified remember we mean adding a gene from the e-coli bacteria to render the plant more immune to herbicides. Mmmm e-coli

This proposal completely fails to protect Australians from foreign competition, from GMO cannabis, from extracts and isolates, and from foreign ownership of the seeds and the plant varieties themselves.

It is also true that the Greens have never met a problem that they did not want to solve with an authoritarian response - more laws, more bureaucracy, more police, more taxation & more fine revenue levied off the backs of average Australians. RESET! looks to bring medical cannabis to everyone in need without adding to bureaucracy and at a subsidised cost. The lead time on creating the Greens' big new bureaucracy is about 2 years, so understand that.

The Greens want to pass a law we already have

The amendments to the legislation initiated by Abbott and passed in 2016/7 legalised medical cannabis. There is no reason that cannabis clinics could not open tomorrow in terms of how our current legislation is worded. The problem is actually the regulations that the Forces of Pharma introduced to "implement" the legislation - those turned the intent of the amendment on it's head and regulated medical cannabis to a standstill. What this means is that there is no point to the Greens' proposal. It will duplicate legislation that we already have, duplicate regulations we already have that will be written by bureaucrats just like the ones we already have and that consider cannabis a poor career choice. Unless we see the Regulations that will implement this, unless the Greens' actually do that hard work and stop the Forces of Pharma NOTHING WILL CHANGE.

The Greens want to get you locked up

The Greens propose no change to driving laws and that is just plain crazy. Already thousands of Australians face huge fines, loss of income and loss of license from driving with cannabis in their system. Yet we know that cannabis can stay resident (and trigger a positive drug test) for up to 12 days after consumption, yet only affect driving for the first day, if at all. RESET! proposes a "minimum allowable level" of THC. This common sense law is in place in many US States with legal medical cannabis. The failure of the Greens' proposal to look at driving laws is wrong, it will lead to massive rates of fines, loss of license and incarceration.

RESET! did the work the Greens did not

Unlike the lazy Greens we have actually written the 50 pages of Regulation changes that will bring natural, whole plant, Australian medical cannabis to anyone with a medical need. RESET! will deliver that outcome within a few months of being tabled in Parliament. We also believe the issue of decriminalisation is part of the wider decriminalisation of all drugs, that is to say - ending the war on drugs. The Greens are being specious in trying to carve out marijuana from the list of banned drugs and decriminalising that, and basing that justification on the success of decriminalisation of ALL drugs in other jurisdictions. You either take out the criminal element or you do not. You either treat drug addiction as a health problem or you do not. Cherry picking for political gain is the wrong thing to do.

It is time for a Plebiscite

Our elected representatives have failed to act on the will of the people. Channel 7 reminded them of that. 305,000 Australians responding to that survey reminded them of that. Still they ignore us. The Greens have made a proposal that has much grounding in reality and this they will also ignore. PHON has passed medical cannabis rescheduling in the Senate and still the Government refuses to bring that motion on in the House of Representatives. Enough of this. It is time for a plebiscite, it is time for the will of the people to be heard.