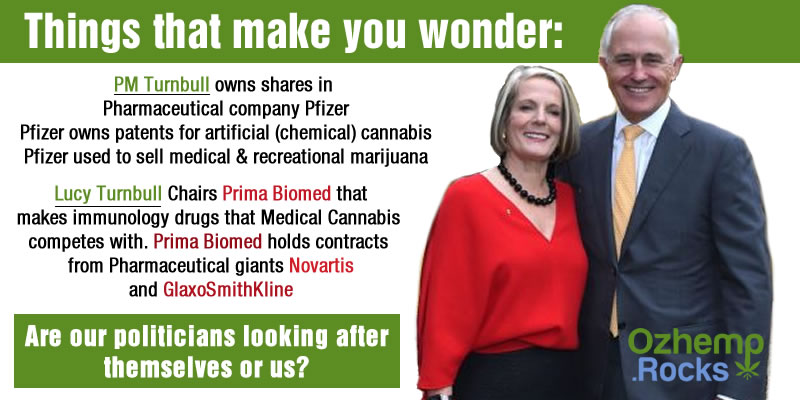 UPDATE: Lateline have done a follow up story on the failure of the Green's Motion to Disallow that everyone thought would make medical cannabis available to the terminally ill. Everyone except the Bill Turner at the Office of Drug Control apparently, who has advised importers to ignore the law of the land and do what they want instead.Story at the bottom.

UPDATE2: Turnbull is no longer PM but the influence of Big Pharma persists. Our nightwatchman Prime Minister has no intention of listening to the people any more than Malcolm Turnbull did. Australia is not a democracy, it is a corporate autocracy.

In 2016 the Turnbull Government announced to the Australian people that medical cannabis had been legalised, with the legislation passing through parliament that year.

Firstly the Office of Drug Control implemented brand new restrictions on medical cannabis with the Narcotic Drugs Regulations 2016, that cannabis is now more highly regulated than the opium grown in Tasmania. Included in the regulations is the requirement that every plant must be sold before it is planted. The contract for sale of that plant to the processor must in turn be matched by a contract for sale of the processed cannabis to a drug manufacturer. This is an unrealistic process for any commercial business and is simply not reflective of commercial reality. Market entrants have been successfully dissuaded from going legit and will continue to be persecuted by the ODC and Law Enforcement.

Then the Therapeutic Goods Administration implemented medical cannabis at patient level simply by shoe-horning it into 2 existing schemes. The Authorised Prescriber Scheme allows Specialists to apply to become registered prescribers, once they have demonstrated proficiency in the use of cannabis medicine (which is illegal until now, so how could they get that expertise?). Once approved the registered Specialist then needs to complete an application for each patient to be prescribed medical cannabis. To do that the Specialist must prove that medical cannabis will be effective for that patient and the patient has exhausted all other options. This turns Specialists into researchers and explains the time it takes to complete one application of between 4 months and 17 months. Only 60 patients have successfully completed the process.

The second scheme is the Special Access Scheme. This allows patients access to drugs that are not available within the normal system. It only allows access for patients who are about to die or who can prove that they would die without it, and then only as a short term solution. Once again about 60 patients have been successful.

So when the TGA says doctors are not interested in prescribing medical cannabis, what they are actually saying is that Specialists do not have the time to complete the application process and don't meet the Cannabis competency in the first place. This is forcing patients back into the illegal market.

So in short the Turnbull Government has lied to the people and failed miserably in their announced policy goal.

Is it fair to read this failure in the context of the Prime Ministerial pecuniary interests in the Pharmaceutical industry? Malcolm Turnbull owns shares in pharmaceutical powerhouse Pfizer. What a surprise to find that Pfizer holds a patent for synthetic cannabis. Interestingly Pfizer also retailed cannabis based medicines and recreational marijuana prior to cannabis being banned in the 50s. When one looks at the regulations that have been put into place and reaches the conclusion that only a very large multinational would be able to meet them, well, lets say, things that make you go hmmm.

Lucy Turnbull is the Chair of Pharmaceutical Company Prima Biomed and owns a substantial shareholding. Prima operates in the space of immunotherapy, their main product is CVac™, which is a method of modifying drugs to suit the metabolism of the user - much the same way that Cannabis can be fine tuned to match the target patient's own system. Their product IMP731 produces an improved immune response and anti-tumour activity. So does Cannabis.

Both Malcolm and Lucy have a direct financial interest in medical cannabis not coming onto the market unless it is marketed by Pfizer. This is not to suggest that the actions of the Turnbull Government were in any way influenced by that financial position, how are we to know what the process was. Here are some references to look into this further:

2010: Lucy Turnbull appointed Chair of Prima Biomed (not listed on her Wikipedia page for some reason)

Here is the Lateline story that has started the latest push back against this pathetic display:

And an earlier piece from the project on 10

Medical Cannabis Report on The project TV from Richard on Vimeo.

This has forced the TGA to make a response, which you can read here. Basically their response is "the system is tried and true, it is working, the problem is the medication is unproven now bugger off".

Here is the follow up story from Lateline. Good on them for not letting this go.

Lateline-SAS from Richard on Vimeo.