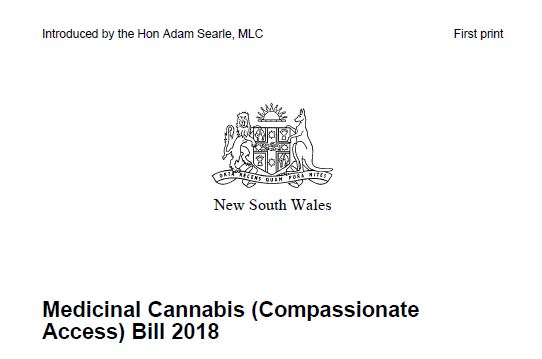 This bill is now at the 2nd reading stage in the NSW upper house, the Legislative Council. Bill sponsor is Hon Adam Searle, MLC (ALP).

Firstly can I say I hope the bill gets up, it will bring medical cannabis to tens of thousands of people who need it. As the ALP do not have the numbers in either chamber, I hope Adam is able to encourage MPs to vote their conscience and not party lines.

This bill basically decriminalises the use and production of medical cannabis, both for oneself and on behalf of others. To qualify the patient must fit one of these:

(a) severe intractable epilepsy,
(b) Human Immunodeficiency Virus (HIV),
(c) motor neurone disease,
(d) multiple sclerosis,
(e) the neurological disorder known as stiff person syndrome,
(f)  severe and treatment-resistant nausea and vomiting due to chemotherapy,
(g) pain associated with cancer,
(h) neuropathic pain,
(i) an illness or condition declared by the regulations to be a terminal or serious medical condition.

and then a general statement:

The accent then is on patient suffering, so the onus is on the patient to prove the suffering, not to his or her Doctor but to a bureaucrat. So we have the same problem we currently have, of the bureaucrats making medical decisions. These will not be made out of medical concern but having mind to where their careers may take them - read into high paying jobs with the Pharmaceutical industry.

The allowable medication is:

That seems a short list with small amounts. It does not really reflect the modern types of medical cannabis, such as pills, capsules, topicals (even for control of seizures in real time) & vapes. This is because the bill is not designed to create a medical cannabis industry, it is a decriminalisation bill designed to allow people to grow their own, or obtain supply from someone who is. As such this bill fits well with RESET!, a Federal initiative which provides for the creation of an Australian natural cannabis industry while not really addressing the issue of growing your own, since that is more of a State issue.

1. The application process will be anything the department wants

What we saw at the Federal level during 2016 and 2017 were changes to Federal legislation that allowed medical cannabis to be legalised. What then happened was the bureaucrats and politicians made a career choice to deny the public medical cannabis. They chose to write a set of regulations that actually made medical cannabis harder to get. The same thing could and probably will happen here. The legislation is well written, but at each important point discretion is given to the regulations, which means this whole thing can be upended by bureaucrats more interested in their private sector careers than right and wrong.

Part 2 (5) (1) The Health Secretary may, on application under this Part, register a person as a medicinal user of cannabis or carer of a registered medicinal user if satisfied that the person is eligible to be so registered. What is the registration process and just what does "satisfied" mean? Is the application a form, a visit to a Centrelink (medicare) approved GP? Is provision of a complete medical history required? Do they need to show proof they have tried everything else first? Does this whole process need to be repeated every 12 months, thereby ensuring no doctor will touch you?

All these onerous requirements in the current TGA system were put in place by bureaucrats with no actual authority provided for that in the legislation beyond general statements like this one. Dammit this is where they got us last time!

2. Cannabis cannot be imported as seeds or transported

The circumstances in which cannabis can be possessed is:

Missing from this list is transport. Note regulations exist at a Federal level to control transporting cannabis, it is not covered by supplying, it is a seperate "act". Taken with the repeated use of the phrase "place of residence" it is clear the intention of this legislation will be taken to mean grow, process and consume in your own home. That is great if you live in Nimbin. The very small allowable amounts make it almost impossible for anyone not physically located next door to the grower to attain a supply of any consequence. How can a compassionate nurse who may be helping multiple patients actually do that, with no transport and such small limits. Either the patient or the nurse will have to physically travel to the grower and leave with a few day's supply, rinse and repeat. I hear people saying "well grow your own" but how can a patient in the severe medical distress necessary to qualify actually grow their own anyway?

Missing from this list is also import. Where do they get the seeds from? How many seeds can a person store? If I smuggle in seeds for the latest cultivars how many can I send out, can I post them? At what point does supplying the seeds become legal, if at all? Are these plants coming into being by miraculous conception?

3. The regulations that would implement the legislation have not been written yet.

This is a major problem. Even if the bill passes, delegating the regulations to the bureaucrats will delay implementation at least 6 months while those are written, more if stupidity is written into the first draft (as it will). Had they been incorporated into the legislation then the implementation would be almost immediate and a probable avenue for upending the legislation closed off. Here is an example of how this could be done:

at Part 2 (5) (13) The Health Secretary must ensure that each registered medicinal user and each registered carer is issued with a certificate of registration that incorporates a recent photograph of the person....For that purpose, the Health Secretary may require a person to attend at a specified place to have the person’s photograph taken... Logic would say the nearest Services NSW Office, but what is to stop the Health Department only accrediting a very small number of offices because of the "complexity" of the issue or staffing constraints - I feel a long training program coming up here to "properly equip" staff to issue the permits. The legislation should have specified any Services NSW by visit or providing a photo id, application form and statutory declaration by mail where travel is a problem. It also needed a statement saying the paper license itself must be issued in 7 days or on the spot for a physical visit.

These are just examples of where wording creates room for the bureaucrats to defeat the intention of the legislation.

This legislation adds the missing piece of RESET!, which is local decriminalisation - something that can only be done at a State level. But as a means of getting medical cannabis to patients, it will probably only benefit a small number of self growers and be of no help to the majority of potential patients. Which BTW is better than we have now.

My concern is that the delays and bureaucratic discretion that have been built in to this legislation will play right into the hands of the people who are stalling medical cannabis until BigPharma can come along with their GMO and synthetic products to own the market and displace Australian growers.